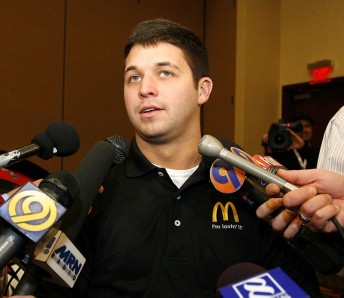 Reed Sorenson will make his last start for Richard Petty Motorsports in the Ford 400 at Homestead-Miami Speedway in Florida this weekend.

Sorenson will climb aboard the famous #43 Dodge for the last time in the season finale, with the team confirming today that he will not be a part of the new-look team in 2010.

Richard Petty Motorsports is in the final stages of completing a merger with Yates Racing. The new look team will field four Fords in the 2010 Sprint Cup Series, with current RPM drivers Kasey Kahne, AJ Allmendinger and Elliott Sadler likely to stay in the fold and be joined by current Yates driver Paul Menard.

Sorenson joined RPM at the start of the season and was given the honour of driving the team’s #43 ride, having previously raced for Chip Ganassi’s team aboard the Target entry.

Highly rated as a youngster upon his entry to NASCAR, Sorenson has failed to fire this year with just one top 10 finish so far this season. Homestead will be Sorenson’s 145th Sprint Cup start.

“I want to thank the Richard Petty Motorsports organisation for giving me the chance to race the #43 Dodge this year,” said Sorenson.

“I did the best I could and tried to represent the number and company in a way that would make Mr Petty and our sponsors proud. I learned a lot this year. The opportunity to work with people like Richard Petty and Dale Inman is something that I’ll never forget.

“I also want to thank all of the people that I’ve worked with this year. I know that everyone put a lot of blood, sweat and tears into getting us to the racetrack every week. I wish we could send them off with a win. They are all first class people and I look forward to hopefully working with some of those people again in the future wherever that takes us.”

Richard Petty wished Sorenson all the best for the future ahead of this weekend’s race.

“Reed is a good guy and I wish him nothing but the best in the future. He went out of his way to represent the #43, the sponsors and everyone involved in our company the right way. We appreciate everything he’s done.”

Sorenson is not the only person to be showed the door at RPM. As the team’s final Dodge cars and engines were prepared for Phoenix and Homestead, many staff have been retrenched as the team prepares to merge with the Yates squad.

The new Petty team is likely to be based out of the existing Yates Racing shop that lies adjacent to Roush-Fenway Racing, which will supply the team technical support.

RPM’s lead driver Kasey Kahne was honest in his appraisal of the situation last week, stating that he was disappointed to see RPM staff laid off as he thought that the RPM Dodges were superior to the Yates Fords.