How to relax before a race meeting …

How to relax before a race meeting … 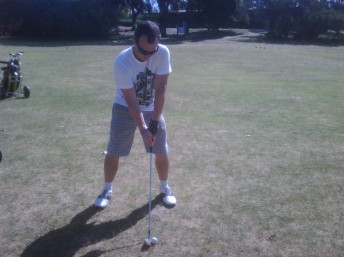 Lee Holdsworth, relaxing on the golf course during the week before focusing on this weekend's V8 Supercar round

The pressures of top level sport means that a relaxing recreational activity is required before a tough weekend of competition.

For some, golf is anything but relaxing, but Garry Rogers Motorsport driver Lee Holdsworth sees a round of golf with a few of his team members as the best way to unwind before a big race meeting.

“It’s a good bonding session to get out there and have a bit of a fun, relaxing session before a stressful race weekend. It’s always a good thing,” he said.

“Golf is such a huge mental game, just like racing, so if you can deal with the frustrations of golf, you’re setting yourself up for a good weekend of racing.

“When the truck goes away, especially at a round like Perth (the truck left on Saturday) the boys have a few days off. Any time we get a day off, we try and get out and play a round of golf. We play, probably, once in between each round of the series. It’s quite frequent.”

So, if golf is meant to be a relaxing way to spend four hours, were they keeping score?

“Any time we play a game of sports, you’re playing for sheep stations,” he said.

“I’m never going to let them win, and they’re the same with me. They’ll never let me win.”

Holdsworth played 18 holes with GRM crew members Scott ‘Ned’ Kelly and Ryan Millier. According to Holdsworth, he won. Speedcafe hopes he bought Kelly and Millier a beer after the round to thank them for their sportsmanship!