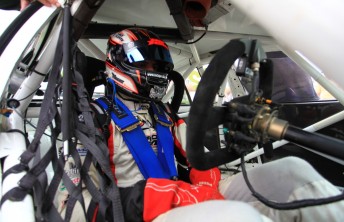 Nick Percat had his first drive of a V8 Supercar at Mallala yesterday.

The recently-crowned Australian Formula Ford Champion drove a Jay Motorsport’s VZ Commodore at Mallala, alongside a host of other drivers.

Percat told Speedcafe that his was pleased with his first V8 hit-out.

“It was good, but it was different to what I thought it was going to be like,” he said.

“Just the way you sit in the cars, all the bar work around you, there’s nothing that really prepares you for what it’s going to be like until you get some miles in them.

“I think I did reasonably well. Jay Verdnik drove the car as well, and I think I was about six or seven tenths off what he was doing. That’s not too bad, considering it was my first day in the car.”

The next time Percat steers a V8 will be in drive days with the Holden Racing Team at the end of the year.