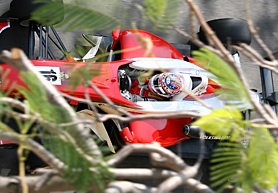 Marcus Ericsson has provisional pole for the Macau Grand Prix

The Swede, driving for the TOM’s team which is aiming for an historic hat-trick of victories in the famous street race, moved to the top of the timesheet in the dying stages of qualifying. The result was guaranteed when the session had to be red-flagged seconds later after Laurens Vanthoor crashed at Police Bend.

Australia driver Daniel Ricciardo, the recently-crowned British Formula 3 Champion, took second place on the provisional grid. He admitted to Autosport.com that he had surpassed his expectations for his maiden Macau meeting.