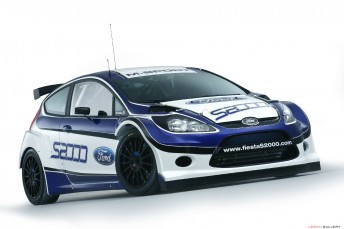 The Ford Fiesta S2000 rally car has been unveiled at M-Sport’s Cumbrian base in the UK. The Fiesta S2000, M-Sport and Ford’s first global rally car, which will be eligible to compete in national rally championships around the world as well as the IRC and S2000 World Cup, is due for homologation in January 2010. It will make its public debut this weekend appearing as course car at the final round of the IRC series, the Rally of Scotland.

Continuing their close relationship with Ford, the team at M-Sport has worked in tandem with Ford of Europe’s Motorsport Technical Manager Mike Norton and the Ford small car design team that developed the acclaimed kinetic design of the Fiesta road car, to develop a dynamic and aggressive looking rally car.

“This is the first global rally car for Ford and M-Sport,” said M-Sport Managing Director Malcolm Wilson. “It’s the first time in five years that we have been able to offer a Ford rally car that can challenge for overall victory in national championships across the world. It is also the culmination of a huge amount of hard work.”

The experience gained from developing the record-breaking Ford Focus RS WRC has been used by the M-Sport team to develop the Fiesta S2000 rally car while working within the new FIA Sporting Regulations which means that this car can be used by customers at both national and international level.

The Fiesta S2000 has already completed nearly 3,000 km of testing both in the UK and Europe and that extensive testing programme will continue into the start of the next year in readiness for the car’s competitive debut.

“Everyone at M-Sport has had to pull together in order to get the Fiesta S2000 finished in such a short period of time and it has been a great team effort to get to this point so quickly,” said M-Sport Technical Director Christian Loriaux. “We have made a very promising start in testing and I am more than pleased with the performance of the car so far; it will be interesting to see how the real pace of the car compares to the competition.”

The Fiesta S2000 is the latest in a long line of rally cars produced as a result of the successful partnership between M-Sport and Ford, starting with the Escort Cosworth in the 1990s and moving on to the record breaking Ford Focus RS WRC and Ford Fiesta ST.