V8s to kick off 2010 series under lights

V8s to kick off 2010 series under lights The opening round of the 2010 V8 Supercar Championship Series at Abu Dhabi’s Yas Marina Circuit will be held at under lights.

It will be the first V8 night race since the opening round of the V8 Supercar Championship Series at Calder Park in 1997.

A collection of V8 Supercar delegates recently returned from Abu Dhabi where they met with circuit officials to decide the track layout and schedules for the February 18-20.

V8 Supercars operations manager Kurt Sakzewski confirmed to Speedcafe the intention is to run the first round of the V8 series under lights. 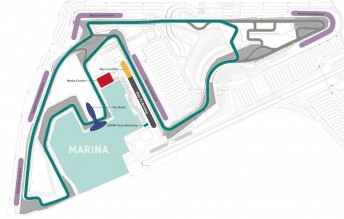 “The circuit has a full lighting system permanently installed, so it has the ability for us to do a twilight/night race, similar to Formula 1.

“Our intention to run in that format. It worked very well for F1 and in terms of the best time, the later in the afternoon, the better it is for them, in terms of how they operate.

“It will be very cool. We’ll start the races in daylight with the lights on and then as it gets darker, the lights come into their own. The drivers will hardly know it’s night time.”

Sunset in Abu Dhabi in mid-February is just after 6pm, which means that the races are likely to be broadcasted live into Australian homes in the early hours of the morning (approximately 1am).

The circuit selected is the 4.7km variant, revealed by Speedcafe two weeks ago, and is 800 metres shorter than the full Grand Prix track.