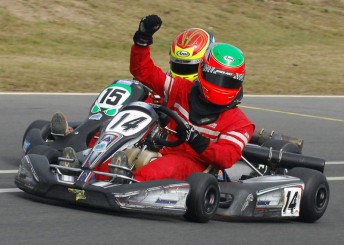 Jones, the son of V8 team owner Brad Jones, will race a leased chassis in the JMax class.

Three classes will compete (JMax, Micromax and Seniors) at the invitation-only meeting – the first time the event has been run.

Jones Jr has had an impressive year, winning the Queensland state title in Junior National Heavy, finishing third in JMax at the Rotax Nationals, plus taking third at the Australian Nationals (JNH).

Jones Sr told Speedcafe that the race at Sepang will be a benefit to him.

“I’m really disappointed that I’m not going to be there, to tell you the truth,” Jones said, who’ll be at Barbagallo raceway this weekend for the penultimate round of the V8 Supercar Series.

“Tom Williamson will be over there with him prepping the car. It’s the first time that Macaulay has been out of the country. There’s kids from all around the world going, including a group of Brazilian kids.

“It’s hard to know how he’ll go. I think he’s capable of finishing in the top five, but for me, it’s more about him taking his first trip overseas and getting a bit of international experience.”