Labonte signs with TRG for 2010

Labonte signs with TRG for 2010 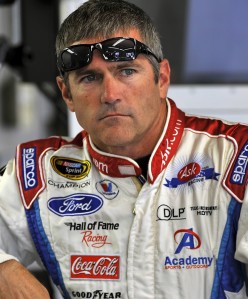 Bobby Labonte has signed on to race full-time for TRG Motorsports in the 2010 NASCAR Sprint Cup Series.

Labonte, the 2000 Sprint Cup Champion, will pilot the team’s #71 entry next season with backing from TaxSlayer.com in seven races.

It’s a dramatic fall from grace for the popular driver, once one of the stars of NASCAR, who also boasts a Nationwide Series title, and IROC Championship and a Daytona 500 pole.

Labonte enjoyed much success with Joe Gibbs Racing in 11 seasons with ‘Coach Gibbs’ team, before looking to new pastures with Petty Enterprises in 2006.

But while many saw potential for Labonte in Roush Fords, his season was not a good one and he was eventually benched in selected races for young Roush development driver Erik Darnell.

TRG struggled its way through its first full Cup season in 2009 and was a ‘start-and-park’ operation for 10 races mid-way through this season.

Labonte has so far competed in six races for TRG towards the end of this season and is excited at the prospect of trying to build-up the fledgling TRG operation, which also plans to run a second entry in the season opening Daytona 500 in February.

“I’m really excited about the opportunity that I’ll have next year with both TRG Motorsports and TaxSlayer.com as a sponsor,” said Labonte.

“Each time I’ve run with the team this year I’ve enjoyed the experience, and I’m looking forward to filling the seat full time next year and really building on what we’ve started.

“I have gotten to know the management team at TaxSlayer and they are great people. I am looking forward to representing them next season.”