If there was a V8 Supercar Chase …

If there was a V8 Supercar Chase … 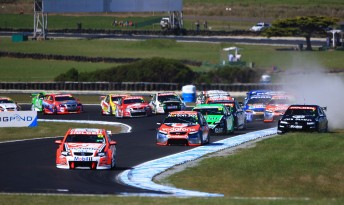 The start of Race 21 at Phillip Island

With just four races of the V8 Supercar Championship Series remaining, only three drivers stand a chance of winning this year’s title.

But is two, possibly three drivers fighting for the title enough? Approaching the final few races, should there be more people in contention?

Opinion in the paddock and amongst fans has been mixed in regards to this topic. It has been well documented that the V8 Supercars Australia Board has looked at proposals to employ the NASCAR-style ‘Chase for the Cup’ system.

If that system was implemented in V8 Supercars, it was proposed that the top 10 after Bathurst qualify for ‘The Chase,’ with each driver starting with 10 points for every race win they’d scored during the year.

V8 commentator, Speedcafe columnist and statistics guru Aaron Noonan got foot loose and fancy-free on his calculator recently and figured out that if you applied that system to this year’s current standings, the results make for a very different championship table.

Tander would be leading the points race, ahead of Whincup, Davison and Jack Daniel’s Racing’s Rick Kelly (see table below).

Under this ‘Chase’ format, all top 10 drivers would still be a mathematical chance of going on to win the crown.

To read this week’s edition of Monday After-Noonan for a full analysis on a possible V8s Chase, just CLICK HERE.