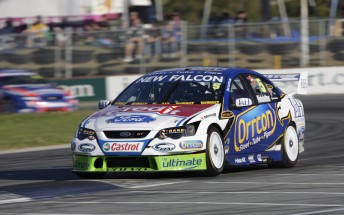 Ford Performance Racing’s Mark Winterbottom expects his rivals to roll the dice at Barbagallo Raceway in a bid to steal an upset win this weekend.

Winterbottom, who dominated the West Australian event last year, told Speedcafe that the highly-abrasive circuit, surrounded by sand traps, will see a lot of teams try and get the upper-hand by saving their Sprint tyres for the end of this weekend’s two races.

“Barbagallo always has a high chance of Safety Cars, so they’ll be guys who are outside the top 10 who’ll save their tyres until the end for a last-hooray,” he said.

“I think people will role the dice more than they have in the past than at other tracks.”

The #5 Orrcon Steel FPR driver says that Dunlop’s Sprint tyres could last as many as 30 laps on the 2.4km circuit.

“It’s difficult to know what the soft tyre is going to do there because it’s generally a hard place on tyres.

“The key is qualifying. If you can out the car on pole, it makes your weekend easier. That will be our goal but you can’t really control when other guys use them. You’ve just got to put yourself in the best possible position.”

Winterbottom, who has just returned from a week holiday in China, said that the change from a early season round to late November would be the biggest difference.

“The time of year is probably the biggest change,” he said.

“It’s going to be a lot hotter, which is going to make a lot of difference. That’s the main difference this year.

Racing kicks off on Friday, with practice for the V8 Supercars at 12.25pm. Two races will be held, with the first on Saturday (100km) and the second on Sunday (200km).