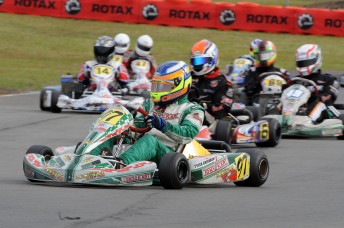 Tyler Greenbury will make his overseas debut in Egypt next month. Pic: photowagon.com.au

Australia will now have seven kart racers line up in the Rotax World Grand Final Challenge in at the Ghibli Raceway in Sharm El Sheikh, Egypt next month.

Originally six drivers were invited to attend the event with IKD, the Australian Rotax importer, but event organisers last week extended the opportunity for another Australian junior driver to line up in the event.

The additional spot will be taken up by Victorian Luke Rochford, who finished fourth in the Rotax Rankings in 2009, to join Jack Howard and Pierce Lehane in the battle for the Junior Max crown.

After initially confirming his entry other commitments have forced David Sera to pass on the offer to compete in the Senior Rotax class at the event. However, this decision by Sera has opened the door for rising Queensland star Tyler Greenbury to compete overseas for the first time. The Toowoomba driver will be joined in the Senior Max category by Nicholas Crawshay.

Victorian Jason Pringle and Brinley Gread, who has dominated DD2 races across the country in 2009, will represent Australia in the two-speed DD2 category.