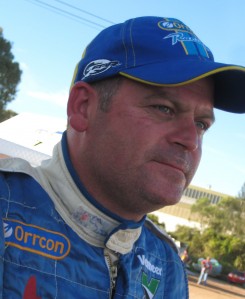 The former Australian Sprintcar Champion looked the goods all night long by winning his heat race, dominating his Dash race and claiming a convincing victory in the 30-lap A-Main event.

Farr started on the outside of the front row alongside Gary Rooke, who continues to impress with his recent showing of speed. The polesitter Rooke grabbed the lead entering turn one but it took less than a lap for Farr to stamp his authority on the event at the front of the field.

Such was the pace set by Farr that within five laps he began to encounter lapped traffic aboard the Orrcon Steel-backed East Coast Pipelines J&J entry as Rooke, Craig Brady and Ian Loudon battled for the minor places.

Despite being forced to endure a number of caution periods throughout the race, Farr showed superior speed to continuously clear away from the chasing pack before taking the chequered flag several car lengths clear of Brady in second place.

“It’s great to get four wins in a season here at Parramatta but when you can get four straight to start the year off it is really a dream run,” said Farr.

“Our main focus this year is the World Series and the past four weeks have really been aimed at providing us as a team an opportunity to try a heap of different things to ensure we are fully prepared for the season ahead.

“The car was very strong all night, especially in the A-Main. Normally the cautions are a good thing when you are leading as it gives you some clear track but tonight I was comfortable in lapped traffic because all of the slower cars were on the bottom and I was running ton the top of the track.”

Brady was his ever consistent best to claim second while Mitchell Dumesny, who started from position seven, battled with an electrical issue to cross the line third ahead of a fast finishing Ian Loudon.