Could Button drive for McLaren in 2010?

Could Button drive for McLaren in 2010? 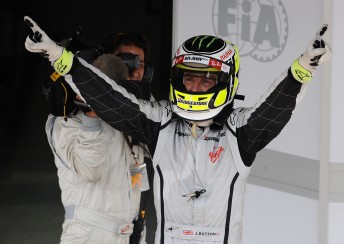 Button: World Champ one year, McLaren driver the next?

Will Jenson Button leave Brawn GP and drive for McLaren next year?

That’s the latest reports in the UK now, according to www.guardian.co.uk writer Alan Henry.

Reports from the website claim that the newly-crowned Formula 1 World Champion visited McLaren’s headquarters at Woking yesterday (Friday), where he was given a tour of the facilities by team principal Martin Whitmarsh.

It is also believed that former McLaren driver and 2007 F1 champ Kimi Riakkonen was also given a similar tour on Wednesday.

BMW driver Nick Heidfeld and current McLaren underperformer Heikki Kovalianen are also believed to be in the running for the drive, although rated outside chances.

One of the sticking points is that Button wants an increase in salary after taking a cut-price deal to drive with Brawn this year. Button’s manager Richard Goddard wants a better price for the new world Champ, certainly more than his reputed £4m (AUD $7.16 million) deal he agreed with the emergent Brawn team that was formed at the start of this season.

“I think it’s also important that Jenson wants to feel valued in whatever situation he finds himself next season,” Goddard said.

“He needs to explore all the feasible options.”

It is believed that McLaren want a deal signed within the week, and if Button gets the nod, it would be the first time that two world champions have competed in the same team since Ayrton Senna and Alain Prost went head-to-head at McLaren in 1989.