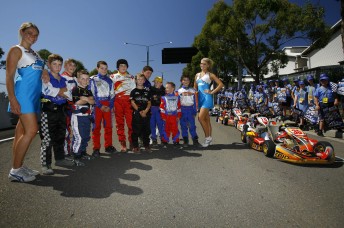 With the Sydney Telstra 500 less than three weeks away, a handful of young karting stars got the opportunity with the Hon. Ian Macdonald, NSW Minister, to receive a special preview of the Sydney Olympic Park circuit by former V8 Supercar Champion and Sydney track design consultant Mark Skaife today.

The young racers, aged between 7 and 11 years old, provided a demonstration aboard their karts for Minister Macdonald, Skaife, Brad Jones Racing’s Jason Richards and students from St Mary’s Primary School.

Minister Macdonald was delighted to get a first-hand look at the venue that will showcase Sydney’s largest sporting and entertainment event for 2009 while also gaining an appreciation for the sport of karting that generates the future stars of V8 Supercars.

“To secure Australia’s biggest motorsport contest as well as one of the year’s most exciting entertainment events is a real coup for New South Wales and in particular Sydney,” said Minister Macdonald.

“New South Wales wants to host the country’s greatest events and the Sydney Telstra 500 is exactly that.

“Not only will the event showcase Sydney to a national and international audience but will bring in nearly $110 million to the state over the next five years as well as creating 110 new full-time jobs.”

Skaife was also impressed with the skill of the young karters behind the wheel and is looking forward to seeing it all come together in just under three weeks time.

“Karting is where it begins for all of the top drivers and it was great to see the youngsters out here today to put on a demonstration,” said Skaife.

“Even though they were running at a reduced speed they all showed that karting has taught them about car control and driving techniques at a very young age.”