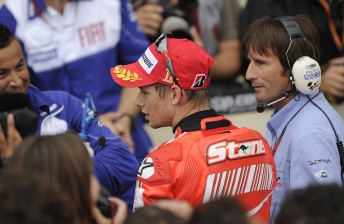 The final day of the post-season testing at Valencia concluded with Casey Stoner ending the year as the fastest rider.

Casey Stoner, riding his Ducati Desmosedici, finished the thre-day test with a best time of 1m31.900s.

The Australian tested new forks and a revised engine configuration on his factory prototype before the test was wrapped up at 1pm, Stoner put in 35 laps during the session, with his top time placing him 0.044s ahead of Honda’s Dani Pedrosa.

Stoner said he was pleased with the information his team banked over the three days.

“We were able to understand the bike a little better today and the fantastic weather conditions certainly helped,” Stoner told Autosport.

“I’m satisfied with this three-day test and with the new characteristics of the bike, in particular the extra traction in corner exit. It is still difficult to figure out exactly the best time to open the throttle but we’re getting there and it is a case of more practice and improving the set-up.”

Pedrosa, who has been testing Ohlins suspension on his 2010 RC212V prototype, was the only other rider to break the 1’32” barrier, with Stoner’s team-mate Nicky Hayden completing what has been a strong test for the Ducati factory bikes as he ranked third fastest, just under a second off his team-mate’s pace.

Andrea Dovizioso made a vast improvement on his previous two days’ work as he also came within a second of Stoner’s time, completing a good final session for the factory Honda team.

Loris Capirossi completed 43 laps on his Suzuki, while Héctor Barberá led the 250cc graduates with a best time of 1m33.787s on his Aspar Ducati, lapping at just under 1.9s off Stoner.