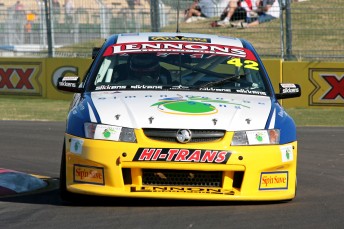 Nick Percat will get his first taste of V8 Supercar power at Mallala Motorsport Park next Wednesday.

The recently-crowned Australian Formula Ford Champion will test the Jay Motorsports Commodore VZ that Shane Price has used in the Fujitsu V8 Supercar Series this year.

Renowned Holden engineer Richard Holloway will go with Percat to the Mallala test to oversee his first-ever V8 laps.

Percat played down the test as a “casual” outing.

“It’s going to be a pretty casual day,” he said.

“It’s just a day to get some miles. I guess I’m going to spend the first part of the day reprogramming myself from a Formula Ford to driving a V8 Supercar. I’ll be concentrate on braking, making sure I get the front of the car into the corner well, so you can get off the corner well.

“With no experience in a V8 to draw from, I’m just going to have to try a few different techniques and see what comes out best.”

Percat has enjoyed support from Walkinshaw Racing during his past two Formula Ford Championship campaigns and, with WR’s assistance, is edging closer to securing a deal to race in next year’s Fujitsu V8 Series.