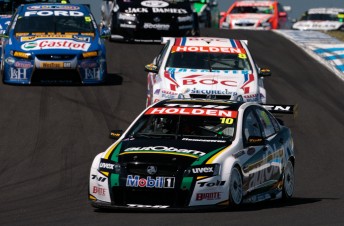 Paul Dumbrell will be announced tomorrow as the driver of the #55 The Bottle-O Racing Ford Falcon FG, prepared by Ford Performance Racing

Paul Dumbrell will be announced as a Ford driver tomorrow after Walkinshaw Racing today confirmed that he will leave the factory Holden team at the conclusion of 2009.

“Paul has done a great job over the last two years and has been a valuable member of our team,” said Craig Wilson, CEO of Walkinshaw Racing.

“It will be sad to see him go but Paul has chosen to further his career outside of Walkinshaw Racing and we wish him well.”

Dumbrell leaves the squad after two years, heading for Ford Performance Racing’s new third entry next season. The 27-year-old was spotted at FPR yesterday, getting a guided tour of the Ford factory by team principal Tim Edwards.

In a WR press statement, Dumbrell thanked the Holden team.

“I have really enjoyed my time with Walkinshaw Racing,” Dumbrell said.

“I have been lucky enough to have had a hard working bunch of guys working on my car and I can’t thank them enough for their constant dedication.

“I have enjoyed sharing this time with them, but the time has come for me to move on and I am excited about what the future holds.”

The 27-year-old is currently 13th in the V8 Supercar Championship Series points.