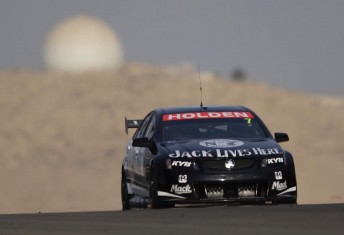 V8 Supercars could compete on the full Grand Prix layout of the Bahrain International Circuit at the category’s visit to the track in February next year.

V8 Supercar officials told Speedcafe that the possibility of the full circuit being used was an option. The issue that they face is they have to add more television cameras to cover the extra circuit.

The shortened 10 turn layout that V8 Supercars currently race on at Bahrain is 3.6km, compared to the 15 turn, 5.41km Grand Prix circuit.

Jack Daniel’s Racing driver Todd Kelly, who drove a Chevrolet Lumina around the full Grand Prix circuit before the V8s competed there, told Speedcafe that he supports the proposed lengthening of the V8 track.

“The full track is absolutely awesome,” he said.

“The best parts of the track are on the bits that we didn’t use before. The bits we use are the most simple and tame part of the joint. There are some really good corners and bits of tracks. I’d be a massive fan of them extending it.

“It would open it up because it would probably be a little bit different in terms of car set-up. It would give you a couple more passing opportunities per lap as well.”

The V8 Supercar Series has competed at Bahrain from 2006 to 2008, but missed this year when it was announced that Bahrain would become the second round of a twin Middle Eastern season kick-off in 2010. Abu Dhabi will host the opening event, followed by Bahrain a week later (February 25-27).

A decision on extending the track is expected to be made in the coming weeks.