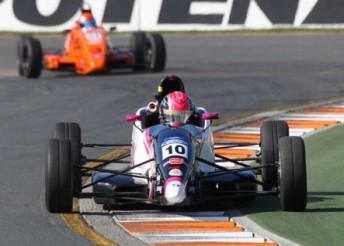 Jack Wynack, Tim Holowell and Jake Spencer will test Minda’s Spectrum chassis at the rural Victorian circuit.
All three drivers have been part of the 2009 junior development kart team setup by DP Karts owner Craig Holowell and are being rewarded with a test in the Formula Ford for their efforts during this season.

“All of these drivers have committed themselves this year and as a part of the program they will be rewarded with a test with Minda Motorsport,” he said.

Wynack has been a stand out this year in Junior Clubman, winning the City of Melbourne title.

Holowell started the year with a win at the 2009 Junior Top Guns and has impressed since moving to seniors only four weeks ago.

Spencer, who works part time at DP Karts, has only done limited racing this year due to study but won both the South Australian and Victorian state titles.

Minda Motorsport has ben selected as the team responsible for the CAMS Rising Star program for the next three years, taking over from Borland Racing Developments.