Schumacher is heading to Vegas

Schumacher is heading to Vegas 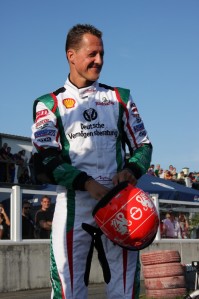 Michael Schumacher will line up for the Tony Kart Team at the SKUSA Nationals in Vegas. Pic: Jenni Wade/VPD Marketing

Seven-time World Formula One Champion Michael Schumacher will be a part of the Tony Kart Factory team line-up at next weekend’s (November 18-22) SKUSA Nationals in Las Vegas.

Schumacher will be competing in the Super Pro (KZ2) category, six-speed gearbox 125cc engine, in the 13th Annual SKUSA Nationals that will take place in front of the Hotel Rio in the centre of Las Vegas.

Since retiring from Formula One at the end of 2006 Schumacher has been seen at a number of karting circuits throughout Europe and in September he competed at the Goldpokal 2009 event held at the Wackersdorf circuit in Germany. After starting from the front row a brazen move by another competitor to snatch the lead from Schumacher sent the former European ICA Champion spinning just laps from the end of the final, leaving him fourth at the chequered flag.

Schumacher will be joined in the line-up for Tony Kart Racing Team in the Super Pro (KZ2) category by 2007 winner and multiple world champion Italian Marco Ardigò and Englishman Gary Catt.

In category KF2 the talented drivers Japanese Yu Kanamaru and Brasilian Guilherme Silva, both racing in the European series, will fly the flag for Tony Kart team.