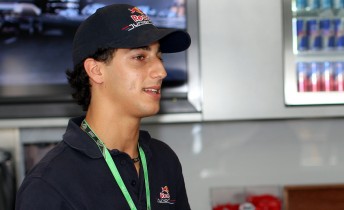 Autosport.com reports that the Red Bull Racing team will test the 20-year-old West Australian on the same day as other young drivers will test F1 cars.

The majority of teams will test drivers who have enjoyed success in other championships.

Ferrari is set to run the top drivers from Italian Formula 3, Williams will give Formula 2 champion Andy Soucek his prize test alongside its 2010 signing Nico Hulkenberg, and the departing BMW Sauber team will give Alexander Rossi and Esteban Gutierrez F1 tests as their reward for winning the Formula BMW World Finals and European title respectively.

Red Bull young driver Brendon Hartley will drive for Toro Rosso at the test, possibly alongside another Red Bull junior.

Ricciardo dominated British F3 in his rookie season this year, having graduated to the championship from Formula Renault. He will drive with Tech 1 Racing next year, competing in Formula Renault 3.5.