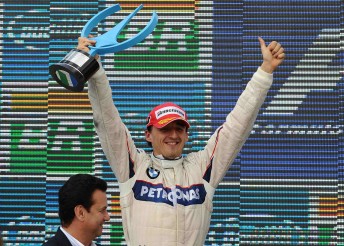 Robert Kubica will swap his F1 suit for rally gear

Formula 1 star Robert Kubica has been confirmed as an entrant on the Sicilian Rally Taormina-Messina which starts on the 13 November – a fortnight before he is expected to go up against World Rally Champion Sebastien Loeb on the French Rallye du Var.

A keen rally fan, and owner of an ex-factory team Skoda Fabia World Rally Car, the winner of the 2008 Canadian Grand Prix recently signed to the Renault F1 team for 2010.

Rally Taormina-Messina organisers have confirmed that the 24-year-old Pole will drive a Renault Clio R3, run by Brescia DP Motorsports, on the two-day event which is the last round of the Italian Tarmac Rally Trophy. He will be co-driven by Polish navigator Michal Kusnierz.

Kubica has strong links with the Italian motorsport community having spent many seasons early in his career racing karts with Italian teams. He’s no stranger to Renaults either, winning Renault’s World Series in 2005, which led to his debut in Formula One.

Kubica is not the only F1 driver to sample a rally car in 2009, 2007 F1 World Champion Kimi Raikkonen made his WRC competition debut on this year’s Rally Finland. And after watching Raikkonen on the stages, fellow F1 driver Heikki Kovalainen also signalled his intention to tackle a rally this year – most likely Finland’s Arctic Lapland Rally.

Reigning MotoGP champion Valentino Rossi will drive a Ford Focus RS WRC on the Monza Rally in Italy later this month, and has been linked to a third WRC outing next year on Rally Mexico.