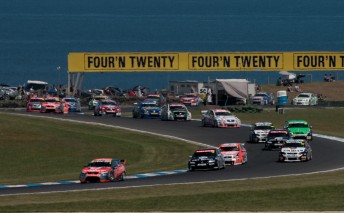 The V8 Supercar ‘Car of the Future’ meeting yesterday was deemed a success, although details of the findings are being kept close to the V8 board’s chest.

Mark Skaife, the five-times Bathurst winner turned series commentator, has been put in charge of the future car project, aimed at decreasing the costs of the popular race machines, reducing the build and repair time and increasing safety.

“We’re all on the same page with it,” V8 board member and Ford Performance Racing team principal Tim Edwards told Speedcafe.

“We’re heading down the right track with it. There’s been a lot of work put in, and it’s encouraging to see. There’s probably still more questions than answers, but the way he’s presented it to us enables us to quantify what the questions are so we can start answering them.

“As far as any details is concerned, you’ll have to wait like everyone else!”

Edwards says that Skaife’s findings will be known before the end of the year.

“I think Mark wants to update the board again in a month or so. After that, it will pretty much become public knowledge what we’re up to after that.”

As reported in Speedcafe on Sunday, one possible outcome for the Car of the Future is that the category’s current chassis will be able to be updated to the new specifications.

An expected race launch date for the Future car is believed to be in 2012.