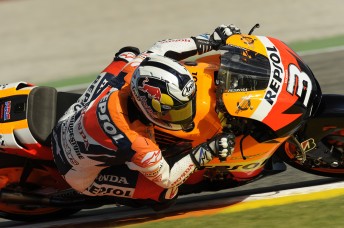 Dani Pedrosa dominated the final round of the MotoGP

Honda rider Dani Pedrosa was the class act in the final round of the MotoGP title, winning at the Valencia circuit today.

Pedrosa led every lap of the race and withstood the distant threat of Yamaha rivals Valentino Rossi and Jorge Lorenzo.

Pedrosa’s win, in front of his home crowd, was his second win for the season.

While it was good times for Pedrosa, it was an embarrassing result for Australian Ducati star Casey Stoner. The 2007 world champion crashed on the warm-up lap, ruling him out of the race.

The crash, coupled with Pedrosa’s win, allowed the Spaniard to pass Stoner for third place in the championship overall.

Australian Chris Vermeulen contested his last MotoGP race for the immediate future. Vermeulan finished a distant 15th in the race, while he took 12th overall for Suzuki in the final standings.