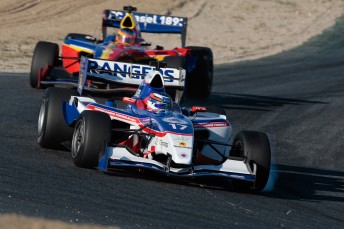 John Martin in his Rangers entry

Australian John Martin has finished 10th in the championship standings after completing his first season of Superleague Formula at Jarama in Spain.

Martin started from 13th in Race 1 and finished 10th after being involved in a turn one melee.

“I just tried to go around the outside at turn one and it is really dirty off line,” Martin said.

“The minute you go wide you can’t stop and then people were going everywhere around me so I had nowhere to go but across the gravel.”

“I ended up dead last (17th as FC Midtylland’s Kasper Andersen was eliminated at the first corner) and just drove around. But then I caught up to PSV Eindhoven after my stop (on lap 12) and thought I might as well push.”
The race was eventually won by Yelmer Buurman (Anderlecht), ahead of Sebastien Bourdais (Sevilla) and Giorgio Pantano (AC Milan).

The reverse grid Race 2 moved Martin up to 7th but it did him few favours.

“We were right in the middle of the mess again,” he said.

“I made a good start and had picked up three places approaching turn one. I thought even if I let one go that would be a good start. Then as I was about to turn in I saw Olympiacos (Esteban Guerrieri) all locked up and the other car (van Dam).”
“So I turned towards the gravel and booted it to try and get out of there as they were coming straight for me. I think the car may have been hit by van Dam as it was a little bit damaged but I got away with it.”

From there it was all to do once again and the 25-year-old put his head down made it up to ninth place.
Victory in Race 2 went to Galatasaray’s Ho-Pin Tung from a hard-charging Craig Dolby (Tottenham Hotspur) and Andersen, while fourth place was enough for Liverpool’s Adrian Valles to secure the championship over Dolby.

The €100,000 to win Super Final was taken out by Buurman, ahead of Bourdais and Valles.