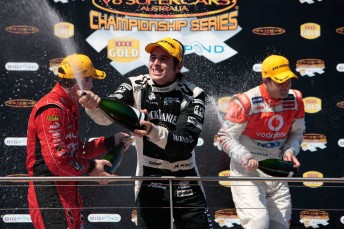 Nine months have passed since Kelly Racing held its official opening at its Braeside base in Victoria, and now, it has some trophies to justify the team’s hard work.

For Kelly, collecting his team’s first trophy wasn’t the weekend’s best point – having the pace to run with Whincup was significant.

“It was awesome to chase Jamie down,” Kelly said.

“He was pushing hard and so was I and we managed to stay within two seconds of him for that whole time.

“I’m pretty stoked with that. If we’re going to win races I need to drive very consistently and get the most out of the car at every corner of every lap of every race.

“We showed that we are quite strong as far as the race car goes and keeping the car on the track and going fast.

“I’m personally satisfied with that, and as far as the team goes, it will be great to let everyone enjoy this.”

Kelly remains seventh in the V8 Supercar Championship Series standings and closed the gap to Mark Winterbottom and Steven Johnson, who both had up and down weekends.

While it was smiles for Rick, his brother Todd in the second JDR Commodore wasn’t having the best of meetings.

A Race 21 incident with Craig Lowndes saw him finish a lap down, before a pit lane penalty for clashing into Garth Tander in pit road sealed his fate – despite showing top five pace in both races.