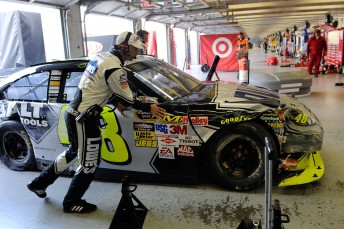 Just when it seemed that Jimmie Johnson was strolling towards a fourth-straight Sprint Cup title, a crash at Texas Motor Speedway has dented his points lead.

With team-mate and title rival Mark Martin coming home in fourth place at the Dickies 500, Johnson’s points lead has been slashed to 73 points with two races remaining.

Disaster struck for Johnson on just lap three of the 334 lap journey, forcing the #48 Lowe’s Chev into the garage area for extensive repairs.

Johnson’s dream Chase run was halted after a tap from David Reutimann in Turn 2 resulted in Sam Hornish Jr. sliding up the track into Johnson.

Johnson fought for control before spinning back into Hornish’s #77 Mobil Dodge and slamming into the inside wall. Johnson was off the track for an hour and eight minutes while his crew worked frantically to repair the car, which suffered heavy damage to the front and rear.

Johnson remained in the car for the duration, pondering what went wrong.

“(I was) on the outside lane, driving by a couple cars, and I didn’t really even see the 77 get loose,” said Johnson.

“I got clobbered from the side. Around I went. I thought about those things sitting in the pits (while the damage was fixed). Watched the guys, hoped that they could get the car fixed and on track.”

Martin is confident that he can take it to Johnson over the last two races of the season in Phoenix and Homestead.

“Yeah, we can go head-to-head with them,” said Martin.

“No doubt about it. In Phoenix we led the most laps and won the last time there and we have no reason to think we can’t run strong at Homestead.

“There could still be swings in the points. There’s two races left, you never know what’s going to happen. I’m really blessed to get to drive their stuff and be in this position.

“No matter what the outcomes is we’ve raced our guts out and I’m so proud of this team.”