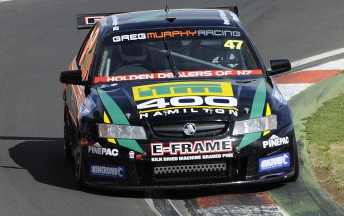 The test has come about as GMR looks to find a driver for the final round of the Fujitsu Series at Homebush after Walter told the team he will not race.

Team manager Dean Lillie spoke to Speedcafe and said that

“We have the driver evaluation day tomorrow, and there might be a possibility, that one of the drivers will do Homebush,” he said.

“We will test them tomorrow in the VZ, but if we can get the VE repaired before Homebush, will use it, but we’re running out of time with a parts supply issue.”

Speedcafe understands that Winslow is the man in the box seat to secure the Homebush driver, budget permitting.

Greg Murphy himself will be at the test tomorrow, taking the participants for a ride in the passenger seat before letting the five testers take the wheel.

GMR entered three cars in the 2008 Fujitsu Series, but has only run one car this year for Walter. Lillie says that he wants to get back up to last year’s levels.

“Our plan is to run three Fujitsu Cars. If we can pull it off, we’ll be happy,” Lillie said.

“It’s a lot easier to focus on one type of car as well. This year, we’ve run Porsches, MINIs, V8s and you end up with three lots of tool boxes, three lots of spares and all the mess that goes with it. If you run three V8s, the focus is on that and it is a lot tidier, even on an administration side of things. It’s just a lot more streamlined way to run the business.”