Four RECs set to go on the V8 market

Four RECs set to go on the V8 market 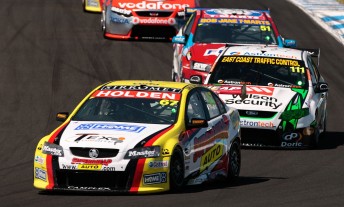 There are set to be four Racing Entitlement Contracts available for sale at the V8 Supercar board meeting on November 18.

Jason Bright’s second Britek Motorsport REC, plus Paul Cruickshank Racing’s REC look set to hit the market, joining Tasman Motorsport’s pair of RECs that were placed for sale at the end of October.

The sale of the Britek and PCR RECs would mean that Cruickshank’s Falcon team (that used both of these RECs to compete this year) is likely to close its doors at the conclusion of the season.

As reported last month, the Dumbrells and the D’Albertos are bidding for the Tasman RECs but the emergence of Webb and Rosenberg as potential buyers of the Britek and PCR entries respectively has thrown a spanner in the works.

V8 Supercars Australia is as keen as ever to buy back one of the RECs to reduce the field from 29 to 28 cars. This means that one of the four REC bidders may miss out, if the V8SA board deems it appropriate to buy one back.

Jonathon Webb has competed in Fujitsu V8 Series since 2007. The Queenslander was close to entering this year’s Championship Series with Paul Morris Motorsport, but the deal fell through, allowing Tim Slade into the spot.

If Webb is successful in his bid for the REC, he is mooted to join Dick Johnson Racing as a third entry.

Ironically, Slade is the man attached to the other bid. James Rosenberg, a long time supporter of all local motor sport, is keen to secure his slice of V8 Supercars, and in turn, guarantee Slade a spot on next year’s V8 grid. Where Slade ends up though is up in the air, however, remaining as a customer at his current home (PMM) is a likely option.

All of this, of course, depends on the agreed sale of RECs from V8SA and the current owners.