Whincup to start from pole for Race 22

Whincup to start from pole for Race 22 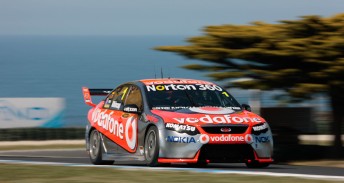 Perhaps the best news for Whincup is that he will start five grid rows ahead of title rival Will Davison (Toll Holden Racing Team). Davison wil start the 200km race from nith position.

Whincup said that the track conditions were vastly different to yesterday’s qualifying session.

“Yeah, tough session for everyone,” he admitted.

“The track caught us unaware. There wasn’t much grip and the track was extremely slippery. I’m proud of the engineers here. They made the right calls to put me on pole.”

Dumbrell’s performance was a stand-out effort, considering he his battling from a bout of flu.

Race 22 of the V8 Supercar Championship Series kicks off at 2.05pm