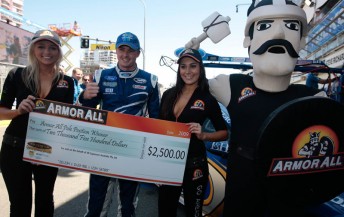 V8 Supercars Australia is reportedly investigating the implementation of a ‘Grand Slam’ type concept similar to the Winston Million in NASCAR during the 80s and 90s.

The Sunday Mail in Queensland reports that next year’s V8 Supercar Championship Series could elevate events in Adelaide, Bathurst, Gold Coast and Sydney to Grand Slam status, similar to the four majors of the golf and tennis worlds.

Any driver who could win all four would be in line for a $2million pay-day according to Damien Stannard.

The concept mirrors the Winston Million, which was a pillar of RJ Reynolds sponsorship of NASCAR until tobacco sponsorship was phased out in North America. Any driver able to sweep the major races in Daytona, Talladega, Charlotte and Darlington took home the cash.

The Winston’s prominence was helped by the fact that Bill Elliott won the bonus in the first year of the scheme, with Jeff Gordon the only other winner of the Grand Slam bonus.

The concept would assist plans to raise the status and prominence of the Surfers Paradise street race on the championship schedule.