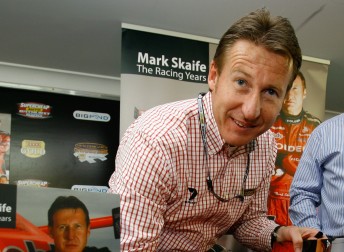 Key V8 Supercar board members will meet with independent board member Mark Skaife tomorrow at Skaife’s Melbourne base to discuss the implementation of V8 Supercar’s ‘Car of the Future.’

Skaife was nominated as the chairman of V8 Supercar’s ‘Car of the Future’ in June and commissioned to formulate the mechanical design of the V8 Supercars, in an effort to reduce build costs, improve safety and even up the playing field.

The Car of the Future was initially intended to launch as early as 2011, although it may be delayed until the start of 2012.

Details of Skaife’s findings will become clearer after tomorrow’s meeting, although Speedcafe was told that there’s a good chance the current V8 Supercar chassis will be able to be converted into a ‘Car of the Future’ machine.

Board member and V8 Supercar team owner Ross Stone said that more will be understood about the project’s progress at the briefing tomorrow.

“There’s a briefing on it tomorrow with Mark (Skaife) giving a presentation, and that’s where everyone will get a clearer picture of where we are at and what we’re heading towards,” he said.

Stone was doubtful of a 2011 introduction, especially if brand-new race cars were needed to be built.

“We need to wait until tomorrow’s brief, but I can’t see anyway that 2011 is an achievable date, in my opinion,” he said.

“These cars are only six, 10 months old and with the economies of scale changing around pit lane, changing the rules for 2011, I don’t think it needs to be rushed.”