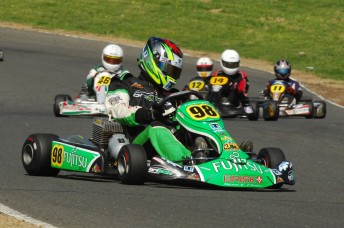 Scott McLaughlin was victorious in the Clubman Light category at the Tasmanian Championships in Smithton. Pic: photowagon.com.au

Gold Coast karter Scott McLaughlin has added another career victory to his long list of achievements in karting by winning the Clubman Light category at the Tall Timbers Hotel/Motel Tasmanian State Championships in Smithton today.

The ex-pat Kiwi who competes aboard the Fujitsu-liveried Arrow kart was the pacesetter all throughout the event, however, McLaughlin didn’t have it all his own way in the championship final.

McLaughlin’s experience shone through in an action packed final to claim the win ahead of Tasmanian’s Trent Palmer and Matthew Distoll.

Victorian Aaron Johnstone was a standout performer for the mainland visitors by taking out both the Senior National Light and Heavy Championship in his debut as a senior competitor.

Hobart’s Mark Brown appeared set to challenge Johnstone for the win in the Heavy division, however, when he failed to finish the pre-final he was forced to start the championship final from the rear of the grid. Brown drove a superb race to claim the runner-up spot but it was Johnstone who claimed the glory.

In the top Junior category contested over the weekend, Junior Clubman, Australian Champion Chris Hays led the early running of the final but Victorians Jarrod Egan and Jordan Ford shadowed his every move.

The trio ran in a close proximity for the duration of the championship final, swapping positions lap after lap, before Ford took the lead with four laps remaining and drove on to claim the victory.