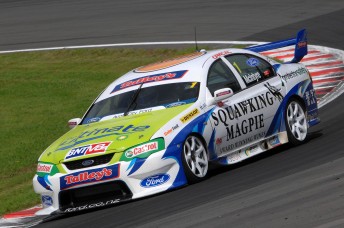 John McIntyre has taken pole position for the opening round of the BNT V8s Championship at Pukekohe.

The two-time New Zealand V8 touring car champion secured pole with a time of 1m01.027s, just under a 0.1s ahead of Eddie Bell and Andy Booth.

“It was an awesome lap,” said an elated McIntyre.

“When I came out of the hairpin, I could see from the on-board data that it would be good.”

This season the qualifying programme for the V8s has changed slightly with the top 10 drivers doing a flying lap shootout to determine grid placings.

The first of the weekend’s races is a 12-lap race, with a second 12-lap race to be followed by the full reverse grid 22-lap evert.