Whincup back on top with Race 21 victory

Whincup back on top with Race 21 victory 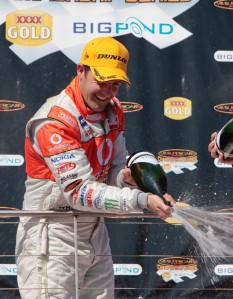 Jamie Whincup celebrating on the podium at Phillip Island

Jamie Whincup has extended his championship lead by a further 12 points after winning Race 21 of the V8 Supercar Championship Series at Phillip Island today.

The win was Whincup’s first race victory since Queensland Raceway in early August.

“The car was pretty quick and good right at the end,” Whincup said post-race.

“I had a tough run at the Island over the years and Garth (Tander) has had the wood on me the last three years.

“It’s nice to get a victory, but with the 100km today and 200km tomorrow, you get the feeling that its going to be more important tomorrow, even though the points on offer are the same.”

Whincup’s win comes after he decided not compete in the Race of Champions event that he was invited to contest in this week in China.

“It was the right call at the time,” he admitted.

“It may have been a distraction. I feel gutted that I decided not to do it. Hopefully I get another opportunity in the future.”

Will Davison made the perfect start from grid two and led the first two laps of the race before Whincup passed him at MG corner.

Davison didn’t let Whincup get away, but in the end he was no match for the championship leader who extended his points margin.

“I was feeling pretty good out in front but just didn’t quite have the speed,” Davison said.

“Jamie was putting the pressure on and I wasn’t fighting him for it. I was just trying to drive my own race. I didn’t want to run down the white line, so I left him a bit of room. There’s still a lot of racing to go …”

“I couldn’t be happier,” he grinned.

“At the start of the year I was excited, and a little nervous about starting out own team. I’m a happy boy right now with a trophy in my hand.“
While Rick made advances, his brother Todd and Lowndes were creating havoc. The pair was fighting for fourth and fifth and eventually came unstuck at turn two. Kelly got caught in the sand trap, with the clash giving the race its one and only Safety Car period. The stewards are looking at the incident.

Winterbottom’s result moved him into fifth place in the series ahead of Johnson.

Holdsworth was one of the losers in the pit stops. The Valvoline driver stayed out longer than his rivals but lost three spots.

Pole-sitter Jason Bright had an off after a clash with Todd Kelly at turn two on the first lap.