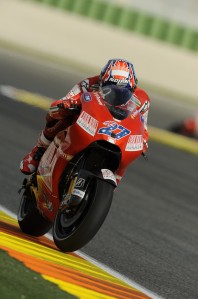 Casey Stoner on his Ducati at Valencia

Casey Stoner has set the fastest time in practice for the final round of the MotoGP Championship at Valencia, Spain, yesterday.

The Australian Ducati rider has enjoyed a sensational return to the sport after sitting out three rounds earlier in the year due to a fatigue-related illness.

Stoner has won the past two Grand Prixs and looks like being the man to catch at Valencia.

After overcoming some early dissatisfaction with the response of his Desmosedici GP9, Stoner set a best time of 1m32.813s to leave Jorge Lorenzo next fastest.

Fiat Yamaha rider Lorenzo is aiming to finish second in the rider’s standings. He currently sits 25 points ahead of Stoner.

Dani Pedrosa was third on the timesheet, ahead of newly-crowned world Champion Valentino Rossi who experienced a minor run-off midway through the session.