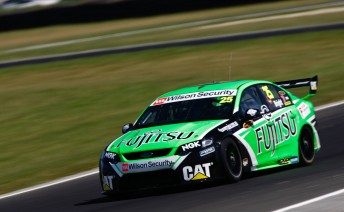 Bright scorched to the top spot (1m33.6487s), ahead of championship challengers Will Davison and Jamie Whincup.

Bright way glad to be back at the front and take his 10th career pole.

“It’s been a while,” a relieved Bright said.

“The car was good here in the 500 and I was looking forward to coming back here after that weekend. I don’t think we showed what we were capable of here last time. This is more proof that we’ve made some more grounds once we got the FG.”

Just missing out on the top 10 was Garth Tander, the only driver in with a realistic chance of the V8 title after Whincup and Davison.

Michael Caruso was 18th and had some choice words to say about Jason Bright over his radio. Caruso was complaining that Bright had held him up on one of his fast laps.

One of the surprise strugglers was Steve Richards, who will start Race 21 from 26th after battling understeer during the session.