The points gap may as well be nil: Davison

The points gap may as well be nil: Davison 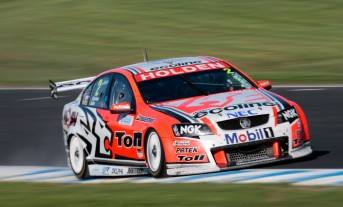 When Will Davison drove away from the Phillip Island circuit in September earlier this year, he left with the largest trophy.

Less than three months later, Davison has added even more items to his trophy cabinet. Not only did he win the L&H 500 at Phillip Island with Garth Tander, Davison also teamed with Tander to win the Bathurst 1000.

The SuperGP didn’t offer any trophies (a surfboard probably wouldn’t have fit in his cabinet anyway!), but perhaps his biggest prize he took from Surfers Paradise was that he considerably narrowed the championship points gap to early-series dominator Jamie Whincup.

Just 32 points separates Whincup from Davison as they head into this weekend’s Island 300 (the replacement round for Bahrain), and according to the Toll Holden Racing Team title challenger, he says “It’s on.”

“The points gap may as well be nil. It’s a clean sheet of paper for the last three rounds. There’s 900 points up for grabs and it will be a matter of who does the best job out of Jamie and I.

“It could come down to who wins the most races, or who makes the least mistakes. I’m not sure what it will come down to. I’ll just have to play it by ear and wait and see how I have to play my cards in terms of how hard to attack.

“If I’m not in a position to win, you just score those points. You might not be in the best scenario in that race.”

Davison says that he won’t be trying any fancy new tricks in the final six races.

“It’s going to be tough, but I’m just going to do what I’ve done all year,” he says.

“If I can try harder now, then what have I been doing all year? It will be no more or no less effort. I certainly don’t want to take it any easier, I drive the way I drive anyway. I’m just keeping the same mentality.“

While Homebush might seem like a long way off, the championship is likely to come down to the last race. How does Davison think it will go?

“Hopefully we go to Homebush, see where I’m at and if it’s close, it will be a ‘on for young and old’ scenario,” he said.

“There could be some desperado stuff going on there, but I don’t want to think about that until we get to Homebush …”

Before Homebush arrives, this weekend’s Island 300 is presents a new – but familiar – challenge.

“It’s very different,” Davison says in the lead up to this weekend’s race.

“The conditions are going to be a little bit different and we’ve only got a small amount of practice to get the car right. Hopefully, in terms of what we were doing with the car, it will all be relative. Our car was good there in September and we’ll start how we finished. It should be bang on.”