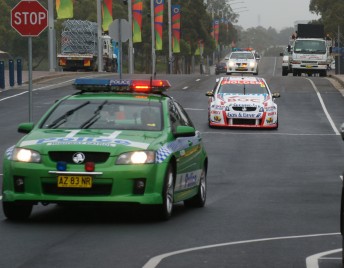 Jason Richards will have a slight advantage on the V8 Supercar pack when it arrives at the Homebush street circuit for December’s Sydney Telstra 500.

The Team BOC driver took to the track for a few promotional hot laps yesterday as part of a feature story for Channel Seven’s Sunrise morning show. Sunrise co-host David Koch rode shot-gun with Richards on his laps of the ‘under construction’ street track around the Homebush Olympic precinct.

The story will be aired this morning on the program.

The drive was sanctioned by V8 Supercars and tightly controlled by the NSW Police Traffic squad with Richards and the Team BOC Commodore under full police escort for the five-lap journey.

Richards was surprised at the amount of elevation that the 3.4km track presents after his first visit to the site.

“The track still has a lot of construction to be completed and today was really just a chance to experience the general flow of the circuit rather than the finished layout,” he said.

“The amount of undulation was quite a surprise as I expected it to be a lot flatter.

“At first look it will be a hard circuit on brakes. The bumps and undulations will really challenge the engineers as they attempt to give the drivers a good platform for set up. It’s a track that I think will really mix up the results.”