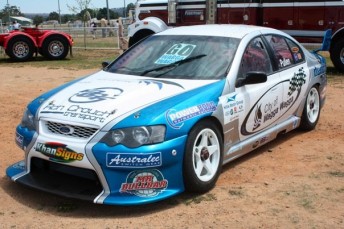 Local Wagga driver Hayden Pullen will drive for the Sieders Racing Team in the final round of the Fujitsu V8 Supercar Series at the inaugural Homebush street race (December 4-6).

The ex-Steve Ellery Falcon BA that David Sieders has campaigned in a limited program this year will carry major support from the City of Wagga Wagga and will feature close to 100 signatures of local support from the Wagga community.

“I just don’t know what words to use, to describe the people that put their names on our car, we are just so proud,” Pullen said.

Pullen tested one of the Sieders’ V8 Supercars at Wakefield Park recently before being given his first race in a club meeting at Winton. Pullen won all three heats he contested.

Sieders Racing’s team manager Luke Sieders says that Homebush will be a tough Fujitsu V8 initiation for him.

“What got Hayden over the line was his raw talent, ability to communicate with the engineers, his ability behind the wheel and the support from his region,” he said.

“If we could get through that weekend with a top 10 result, that would be a excellent effort. First time out, not many guys are able to achieve that.”