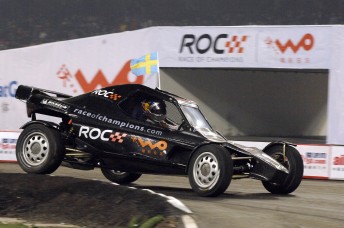 Ekstrom put his continuing success at The Race of Champions down to his upbringing.

“I was born in the countryside in Sweden and drove lots of different cars as a boy, plus I’ve also had the pleasure of racing a lot of good touring cars, Sportscars and rally cars. That is what makes the difference for me,” he said.

Schumacher was complimentary of the event.

“It has the right mixture of seriousness behind the wheel and a relaxed atmosphere in which to meet some good guys.”

Button reached the semi-finals, having won his group and beaten compatriot Priaulx in the quarter finals but was beaten by Ekstrom in the semi. Sebastian Vettel also reached the penultimate round but lost to Schumacher.

For the Australians, it was a frustrating evening. Doohan crashed his KTM X-bow against the concrete barrier, arguably claiming the biggest accident of the day. Chad Reed was also eliminated early.