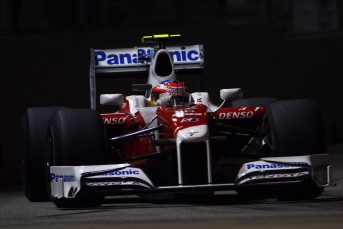 Toyota has left Formula 1 after eight seasons of unfulfilled promise

Toyota has pulled out of Formula 1, effective immediately.

The Japanese car giant told the world in a press statement that its team – which has yielded just 13 podiums and no wins in 139 starts – would close its doors in light of falling sales due to the economic climate.

“Toyota Motor Corporation (TMC) announces it plans to withdraw from the FIA Formula 1 world championship at the end of the 2009 season,” said the statement.

“TMC, which had viewed its participation in F1 as contributing to the prosperity of automotive culture, remained dedicated to competing at the pinnacle of motor sports even in the face of the abrupt economic changes that started last year.

“However, when considering TMC’s motorsports actitives next year and beyond from a comprehensive mid-term viewpoint reflecting the current severe economic realities, TMC decided to withdraw from F1”

Toyota, arguably the most successful car company in world, reported its first-ever operating loss in March this year.

Rumours began then about its future in the sport, but when it signed the new Concorde Agreement (committing it to the world championship through 2012) and then made noises about signing big-name drivers like Kimi Raikkonen for 2010, all seemed to be ticking along – until today.

Toyota entered F1 in 2002, and armed with a huge budget (believed to be in excess of $300 million a year), it was tipped to contend for titles, but after eight seasons, the ‘red and whites’ scored three pole positions, 13 podium finishes, and a best result of fourth in the 2005 constructors’ standings.

Toyota’s sudden departure is set to play into the hands of the new owners of BMW Sauber who had been relying on a team dropping out in order to claim the final spot in 2010’s expanded 26-car F1 field.