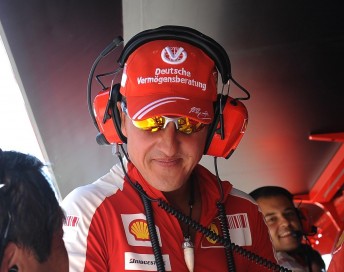 Germany has taken its third-straight Race of Champions ‘Nations Cup’ ahead of tonight’s individual races at Beijing’s Birds Nest stadium.

The final actually came down to a winner-take-all scenario after Vettel crashed in his attempt to beat Button in the second race, but Schumacher beat Priaulx, making Germany the most successful nation in ROC Nations Cup history.

The surprise packets of the meeting was home team China. Drvers Ho-Pin Tung (A1GP) and rally driver Han Han each won their group races against Australia’s Mick Doohan and Chad Reed, before Tung surprised everyone when he downed WRC star Mikko Hirvonen.

China was eventually defeated by Great Britain in the semi-final.

Australia had a disappointing day, with Reed winning just one of the team’s six races. To his credit, his win was against former WRC driver Marcus Gronholm.