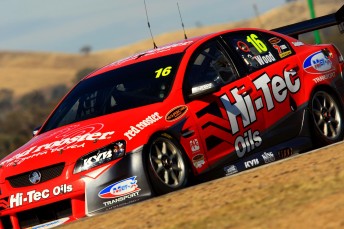 Evans drove his first laps in a 640-horsepower V8 Supercar aboard the #16 Hi-Tec Oils Holden Commodore under the watchful eye of team leaders Todd and Rick Kelly.

“All the guys did a tremendous job today and exceeded my expectations,” said Todd Kelly.

“I’ve noticed Mitch’s performances in Formula Ford this season and for such a young guy he’s very impressive.

“He has to return back to New Zealand as he’s got some school exams this week – you don’t hear that from a racing driver very often.

“Seeing a guy so young thrown in the deep end at his first V8 test reminds me of when Rick and I started off in this sport, so it was a really enjoyable day for us from that perspective.”

Evans finished second in the Australian Formula Ford Championship this year and will make his Formula 3 race debut later this month when he contests the F3 SuperPrix at Sandown.