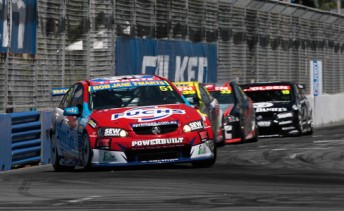 Two solid bids have been placed on both of Tasman Motorsport’s V8 Supercar Racing Entitlement Contracts.

Speedcafe understands that Tony D’Alberto Racing and the Dumbrell family have submitted their interest in the #3 and #51 RECs respectively and they could become the owners, pending board approval at the next meeting on November 18.

The Tasman Motorsport board needs to accept the offers first, before the V8 board ultimately decides if these two entities are suitable to own a REC.

This news does not mean that Tasman Motorsport will not be a V8 Supercar entrant next year, though. Tasman will consider the bids and may elect to maintain a presence in the V8 Supercar field. Tasman has simply put both of its licences up to ‘gauge interest’ in the possible sale of the RECs.

It is believed that the Dumbrell family’s bid on the REC is higher than TDR’s, which would mean that if V8SA decide to only accept one sale (and reduced the V8 field to 28 cars), or if Tasman decided to keep a REC, TDR could miss out.

The Dumbrell’s bid to own a V8 REC is intended to give its youngest son Lucas Dumbrell his ‘own’ team after his tragic Formula Ford accident last year where he was left a quadriplegic. Speedcafe can reveal that the new team plans to lease the Walkinshaw Racing-built Commodore VE for its debut season, if it is successful in securing one of the RECs.

Tony D’Alberto Racing has been involved in V8 Supercars for five years, entering the Fujitsu V8 Series in 2005 and ultimately winning it in 2007. D’Alberto progressed to the Championship Series using the #55 Rod Nash Racing entry.

Nash has confirmed that he will take his REC and The Bottle-O sponsorship to Ford Performance Racing next year, with Paul Dumbrell tipped to be the driver.