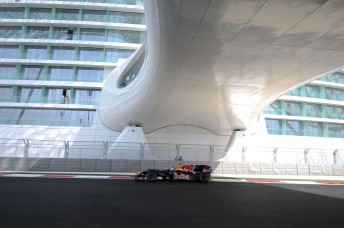 It was fourth Red Bull Racing one-two for 2009 which included 16 podiums in total between Vettel and Webber.

Ultimately, it wasn’t enough to beat Button and Brawn GP to the championship, but it proved to be Red Bull’s most competitive F1 season.

“It was a fantastic race,” Vettel said.

“We had a good start, not good enough to out accelerate Lewis (Hamilton), but I was able to stay close enough. Unfortunately, he had to retire, but it was a fantastic race.

“The car was a dream today. Until the end, the car was fantastic, on both tyre compounds. It was a pleasure this evening to sit in the car.”

Vettel’s victory was enough to help him beat Barrichello to second place in the driver’s title.

The race, held in twilight/night at the Middle Eastern circuit, ran relatively incident-free, with only a clash between Buemi and Robert Kubica causing a yellow flag.

The challenge from pole-sitter Lewis Hamilton failed before half race distance. The McLaren driver had suspected brake troubles, eliminating him from the race.

Neither McLaren or Ferrari finished in the points, meaning McLaren maintained third in constructors’ title. BMW Sauber moved to sixth ahead of Williams with Heidfeld’s fifth place.