Sera and Wall prove too good once again

Sera and Wall prove too good once again 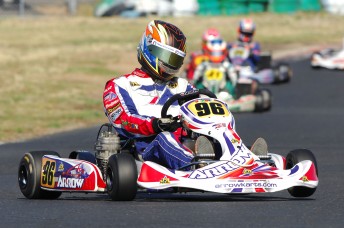 David Sera on his way to victory in Formula 100 Light. Pic: photowagon.com.au

Victorians David Sera and Matthew Wall have once again proven why they are considered two of the best Australian karters of all time with a pair of scintillating victories at the Formula 100 Nationals in Melbourne today.

The pair, who now have an impressive 19 National Championships between them, tasted victory at the Formula 100 Nationals in the Light and Heavy categories respectively at Port Melbourne’s Todd Road circuit.

The Formula 100 category sees drivers use engines similar to those used in Europe by the likes of Formula One World Champions Jensen Button and Lewis Hamilton during their karting careers and reach speeds in excess of 130 km/h.

Sera recovered from a mechanical issue in yesterday’s opening heat, which saw him finish at the back of the field, to dominate today’s proceedings and claim his first Formula 100 National crown. A victory that now moves him equal with Ford Performance Racing V8 Supercar driver Mark Winterbottom, who was trackside to witness the action, on ten National Championships in the Australian karting record books.

“After qualifying on pole position at this event for the past two years it is great to finally break through and win the Nationals Championship in Formula 100,” said Sera, who has now won three Australian Championships in 2009 for the Arrow Karts team.

“Today’s win certainly ticks another box that I’ve wanted to tick in my karting career, now I’m going to be setting my sights on the KZ2 Championship in 2010.”

Behind Sera came 2008 Champion Adam Hughes. The Melbourne driver pulled clear of an intense battle between Tyler Greenbury, Hayden McBride and Daniel Richert for third place mid race. McBride, who started from the back of the field, was able to snare the final spot on the podium. 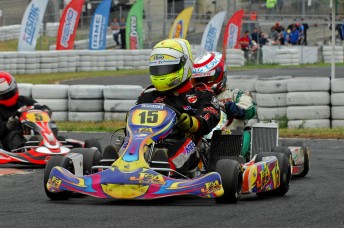 In the Formula 100 Heavy category Wall was the dominant driver all weekend, however, a broken water pump nearly put an end to his campaign mid-way through the final. Luckily Wall had a large gap over the rest of the field and he was able to conserve his engine to nurse his J&A Tuning powered machine home and claim a deserved victory.

Wall’s win is the seventh National crown by a J&A Tuning powered driver in 2009.

“Any green plate is nice, my goal this year was to win the Clubman Heavy title at the Nationals in Townsville, now I’ve been fortunate enough to win in Clubman, Rotax and Formula 100 all in the same year,” said Wall.

“We changed engines for the final, saving our best for last, but unfortunately the water pump came off mid way through the race. Luckily I had built up enough of a lead and was able to back off and conserve the engine to get to the end.”

Ironically, Brad Fitch, who was chasing Wall’s ailing kart home for second, seized on the second-last lap. The demise of Fitch allowed Victorian Matthew Mills to claim second place in his First Kart ahead of Bobby Bourke.

The event also doubled as the Leopard Challenge Final and it was Adam Hughes who proved too good aboard his Kosmic Kart in Leopard Light while Toowoomba’s Brendan Nelson took out the Leopard Heavy division.