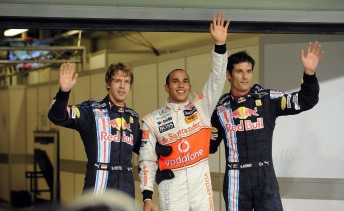 The McLaren driver held onto pole in the last qualifying session for the year after a late charge from Red Bull Racing duo Sebastian Vettel and Mark Webber.

But Hamilton was far too good – stopping the clocks at 1m 40.948s on Saturday evening, eventually over 0.6s faster than Vettel and Webber.

Hamilton was the fastest driver at the end of all three qualifying segments.

The BMW Saubers have locked out the fourth row of the grid, with Robert Kubica and Nick Heidfeld scoring the slots ahead of Williams’s Nico Rosberg and Toro Rosso’s Sebastien Buemi.

In the hard luck department, Ferrari’s Kimi Raikkonen will start from 11th while Heikki Kovalainen was stranded at Turn 17 with suspected gearbox issues.