Getting to Bahrain “would have been tight”

Getting to Bahrain “would have been tight” 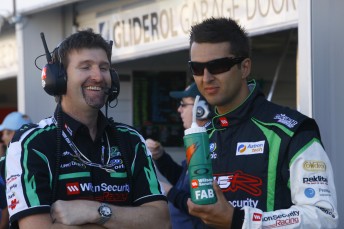 If the V8 Supercar circus was heading to Bahrain next weekend, its teams would have been loading their equipment onto the Atlas Air Cargo 747 tomorrow.

With less than a week to turn the cars from Surfers Paradise wrecks to Bahrain racers,it was always going to be a tough task – and no team was going to be in a bigger predicament that the Wilson Security Racing.

Fabian Coulthard’s Falcon was involved in a Sunday morning start-line incident with Cameron McConville that saw both cars eliminated for the remainder of the meeting.

The Coulthard car was hit the hardest, and team boss Paul Cruickshank said that getting the Falcon onto the plane might have been touch and go …

“It would have been very tight,” he said.

“We were the worst casualty from the weekend. I think we won that round easy!

“I guess we would have made it (onto the plane). The car was back here yesterday morning, so if we needed to get it ready to freight, we would have had all hands on deck and finished it last night.”

But instead, the trip to the Middle East has been delayed until February next year, and next weekend’s two-day Island 300 has replaced it.