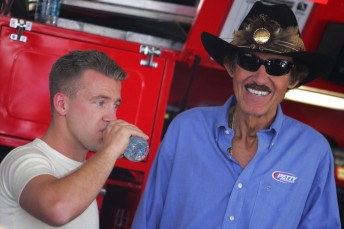 AJ Allmendinger has been arrested on charges of driving while impaired in the lead-up to the AMP Energy 500 in Talladega, Alabama this weekend.

The Champ Car winner turned NASCAR driver will retain his seat in Richard Petty Motorsports #44 Dodge this weekend despite the drink driving charge. He will face court on December 18.

NASCAR has placed Allmendinger on probation until 31 December 2009 for violating Section 12-1 of the rulebook, ‘actions detrimental to stock car racing’.

Police stopped the American in his 2007 Lexus at approximately 1:30am Thursday US Eastern time, with a field sobriety test showing a blood alcohol level of 0.08.

Allmendinger admitted the charges in a team statement and took responsibility for the incident.

“I made an error in judgement last night for which I take full responsibility,” said Allmendinger.

“I went out to dinner and I had a couple of drinks. I honestly felt fine but I obviously should have erred more on the side of caution particulary given what I do for a living.

“It was a bad judgement call and I apologise for that.”

While Richard Petty is not the controlling owner of Richard Petty Motorsports, the news of Allmendinger’s infraction will no doubt rile ‘The King’, who is sensitive towards alcohol sponsorships in NASCAR.

“I am deeply disappointed this has happened,” said Petty, also via a team statement.

“AJ has accepted full responsibility for his actions and will work to make this right. On behalf of everyone at Richard Petty Motorsports we sincerely apologise to our fans and partners.”